Here is a question: what spot in your body do you consider to be your true center?  Most of us would agree that the answer would be the heart.  Where do you point to when you identify yourself or another?

That’s right- your chest. But wait…. doesn’t it seem like we usually point a bit higher than the actual placement of the heart? Is this significant?

What do we find in our body in this spot just above the heart?

We find the thymus gland, an essential component of the immune system.

Developing this kind of inner trust to know what is you and not-you is a huge factor in a healthy immune system.  Being true to these things can take courage.  Think of people coming out to their families about their sexual orientation, or a wife telling her husband that her feelings have changed.  This stuff gets scary.

The thymus gland is a lot like the training wheels that have to eventually fall away  if we are going to learn how to be grown up.

The thymus is the largest at the height of puberty.  From there on it starts to shrink.  It shrinks because of it’s reduced role in helping T-cells (killer white blood cells) mature to fight infection.  It’s like a drill sergeant, or a Mr. Miyagi in that way.  By the age of 50 only we don’t need that function as much so only about 15 percent of the thymus remains.  Our killer T-cells have fully grown.  Mr. Miyagi fades away a bit, so to speak, leaving us educated and well equipped.

The ancient Greeks believed the thymus gland to be the “seat of the soul” and it’s name derived from the Greek root, “thumos” which means “soul” or “spirit”.  Thymus vulgaris is the scientific name for the herb thyme, which has been associated with courage since ancient times. 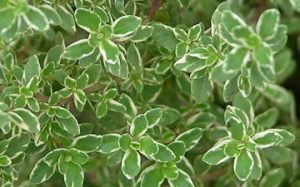 The knights of the Middle Ages, the Scottish highlanders, the Greeks and the Romans all thought that thyme brought on courage and strength. Thyme is a powerful antiseptic and anti-inflammatory- this herb is ready to combat!(ARIES- sense of “me”)

Here is another Arian thymus image to drive home this concept. Gorillas instinctively pound on their thymus glands to initiate dominance or celebrate victory.

Ok, so let’s get back to the heart.  After all the thymus sits right above it, and in the chakra system it is referred to as the “high heart chakra”.  Thymus energy is a fiery sense of true self sitting right above our hearts… 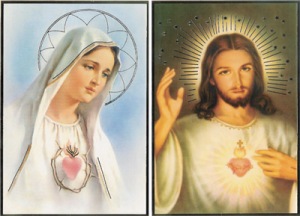 Yeah- like this! There are many variation of the sacred heart but all include the flame at the top. Jesus as a name is very similar to the french phrase “Je suis”, or “I am” (Arian thymus words).

The country at the top of the list for the LEAST heart disease is France, which confuses a lot of physicians because their diet is notoriously full of cheese wine and deserts.  They call it “the French Paradox” and many theories attempt to explain this by researching the health benefits of red wine of which the french are so dearly fond of.  While I am a huge fan of red wine I think there is another component to why the french seem to luck out with healthy hearts: LANGUAGE.

Name the color of each word by COLOR not word. See how fast you can do it. A psychological interference takes placed dubbed the “Stroop effect” (after the scientist who discovered it). Reading the words come easier than reading the colors when the two are incongruent.

In astrology, the third house is where we find our words AND perception (associated with Mercury and Gemini).  The test above shows just how much these two things can interfere with each other.  The third house is begins the Mutable Cross of the zodiac.  Mutable signs are change-loving and ADAPTIVE.  The first axis (3rd and 9th) deal with perception and learning and the next branch (6th and 12th) is the HEALTH axis.  We all know what happens when immune systems ADAPT well to their environment. 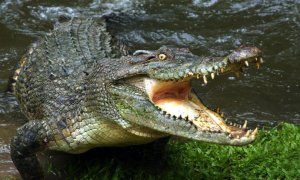 Ferocious HEALTH. The alligator is the animal with the highest functioning immune system. Living in all that swampy water and engaging in bloody territorial attacks is one dirty lifestyle.  For an immune system to adapt to this it would HAVE to be strong.  Chemists in Louisiana found that blood from the American alligator can successfully destroy 23 strains of bacteria, including strains known to be resistant to antibiotics. Human blood was found only to be able to destroy 8 of the 23 strains.

The point is, our words and our languages lead to broad aspects in the way we perceive things, down to our very cells.  The french word for heart is “coeur” very similar to the latin word for heart which is “cor”.

Here the CORE of an apple demonstrates a perfect star. Just as in the natal chart the Sun is the only true star, it rules our hearts at the center.

The french word for courage is very similar to ours, it’s “corage”.  There is that similar root meaning center.  For the french the concept of heart and courage are MUCH more entwined than for us.  Courage too as a concept probably has a lot more to do with inner truth and heart matters than it does for us. 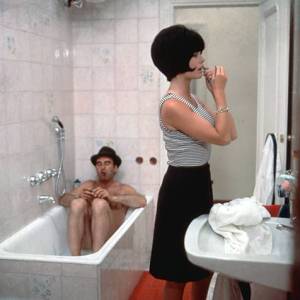 The french are known for their playful boldness and confidence. These are traits that are naturally associated with the sign Leo, which is the sign of the Sun and heart. Are the french more in tuned with this natural human way?

I was surprised to find out that Spain was not high on the list for low heart disease knowing that their word for heart was “corazon” and their word for courage was “coraje”.  It was of interest to find out that the suffix “azo” in spanish is connected to “pain” and “a blow by an object”.  Maybe that’s why there are sad mariachi singers who explore that heart pain so beautifully! 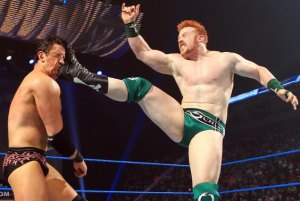 Ouch! That zapatazo has to hurt. ZapatAZO is spanish for “kick”.

And then we have our word, heart.  Heart is a very lovely word, as is “corazon” for that matter.  But what is another word that sounds like heart?

That’s right, “hurt”. In fact I think that is the word most similar phonetically in our whole language. Could this put us in a position to see our english speaking hearts as more vulnerable than the french coeurs?  Of course, vulnerability is a virtue in itself.

Charlemagne said “to have a second language is to have a second soul”.  These differences in words are subtle but powerful.  Being open to learning foreign ways of viewing things is of immense benefits to our minds and bodies.

The thymus gland and the french remind us that courage and the heart are and always will be intimately connected.  From now on I not only have a heart, I also have a coeur!  A coeur at my core, and if in times it beats faster out of fear I will try and hear it like a war drum summoning le corage! 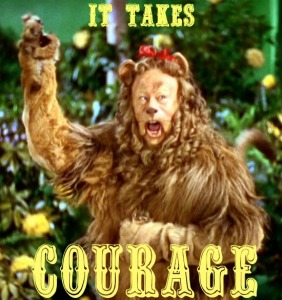 Why do I always come back to this guy?