Fire excites.  Water makes you feel.  Here are two examples of those energies in action taken from the Oscars this past Sunday.

Patricia Arquette stoked the flames in the audiences hearts when she used her acceptance speech to command attention to the need for equal wages and equal rights for women. Meryl Streep was so excited that she stood up and pointed “Yes!”.  Patricia is a double fire sign, with her Sun in Aries and her Moon in Leo.  Not to mention that at the time of her speech transiting Venus and Mars were in Aries (fiery passion) and stimulating her natal Aries Mercury in the 9th house (her fiery mind naturally tuned into 9th house matters, like politics).

Patricia started the political fieriness off early in the night, bringing excitement to the audience 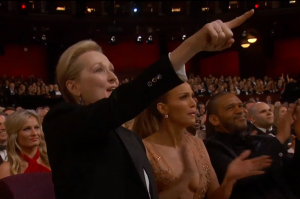 The excitement brought Meryl to her feet shouting “Yes!”

Common and John Legend’s performance of “Glory” stirred up a lot of emotion in the audience.  Tears continued to flow as they took turns with the acceptance speech after winning the award moments later.  Common is a double Water, with both his Sun and Moon in compassionate all-embracing Pisces.  The last line of the speech, in reference to the “spirit of the bridge” at Selma couldn’t sum up the Pisces energy any better: “This bridge was built on hope, welded with compassion and elevated by love for all human beings”.

Common and Legend made a point to have their acceptance speech tie directly into the important themes equal rights for all human beings prolonging the high emotions in the audience.

David Oyelowo has Venus in Pisces as did Martin Luther King. Relating to others (Venus) in an all-accepting compassionate way (Pisces). MLK also had a Pisces Moon which puts those themes even more centered into his soul.

All in all a very enjoyable Oscars!